The latest in the oldest

Whilst on holiday in Denmark Gillian Thomas found a museum that proved a success for all the family, whatever their age.
Kongernes Jelling – the Royal Jelling Experience Centre – turned out to be the biggest hit of our family holiday in Denmark, despite protests from my six and eight year-old grandsons when they realised it involved going round a museum. But this is no ordinary museum as it depicts the story of the Vikings – their origins, lifestyle, battles and legends – in an exceptionally entertaining, educative and intriguing way. 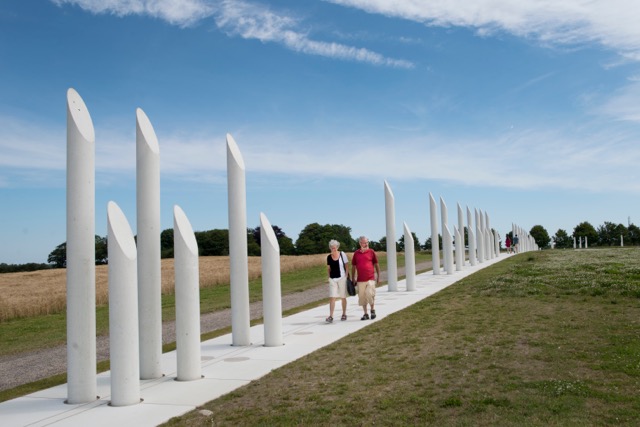 The little town of Jelling, set in Jutland’s quiet countryside, is itself a UNESCO World Heritage site having been the seat 1000 years ago of the first two Viking kings – Gorm the Old and his son Harald Bluetooth. They are buried there under two large grass-covered mounds Nearby are two huge rune stones whose squiggles include the first reference to the name Denmark..
By contrast, a very recent addition to this historic spot, are the rows of tall white pillars. They mark the boat-shaped outline of what archaeologists now reckon may have been a grand memorial to Gorm and Harald.

Step inside Kongernes Jelling and the whole scene comes vividly alive. Having no artefacts to exhibit, the Viking story is told through clever digital displays, imaginative light and sound effects, mirrors and holograms. There are buttons to press, levers to pull and screens to touch. It all captivated me as much as my techno-mad grandsons and their mother.
We were all mesmerised, for instance, by watching the animated Royal family tree projected onto a wall. Accompanied by a commentary, it vividly shows how bloody early Viking history was. Kings are crowned, stabbed and beheaded in quick succession, entertainingly illustrated as they came and went by crowns and axes which jump from one head to another.

My grandsons also enjoyed shoving swords, axes and spears into a fallen warrior, particularly as each weapon emitted stomach-churning sounds of metal ripping flesh as red LED blood seeped from his wounds. More to my taste was listening to ancient legends in a darkened room beside a realistic-looking fire blazing on a screen.
All the way round, you can glean as many facts and figures as you want. We were all fascinated to discover that the modern Bluetooth logo is based on two ancient runes – apparently its inventor was a Viking anorak. Bluetooth himself got his name due to a decayed front tooth – information which no child is likely to forget.
.
Visits end on the building’s roof terrace where you can press a button on digital binoculars and see the scene below at eight different times in its 1000-year history, including a huge fire which destroyed the town’s first church. 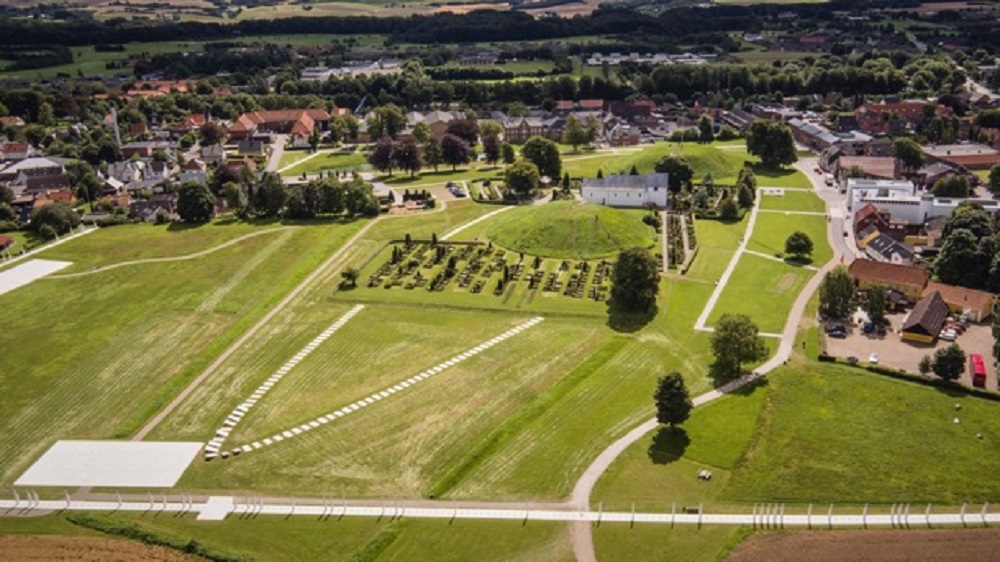 Built at a cost of £7.5 million in 2015, Kongernes Jelling is already attracting around 230,000 visitors a year; admission is free. The Faested Viking Treasure, the largest hoard of Viking gold treasure, recently found nearby, goes on display there in February 2018, part of a new exhibition entitled The Animals Beneath Us.
Jelling itself has an atmospheric 17th-century pub, Jelling Kro, a local institution which specialises in traditional Danish food and also hires out bikes. For a short excursion, a cycle trail leads down through woods to Farup Lake, a good spot to catch a spectacular sunset.

Legoland and close by attractions

Although most visitors come to this part of Denmark because of Legoland, just a few miles away in Billund, there are a variety of other attractions around the area too.
Also in Billund is Lalandia, Europe’s largest indoor water park, and nearby is the safari-style Givskud Zoo with lions, giraffes, gorillas and parkland where you can stroll freely among smaller animals like endearing bush babies and miniature goats. 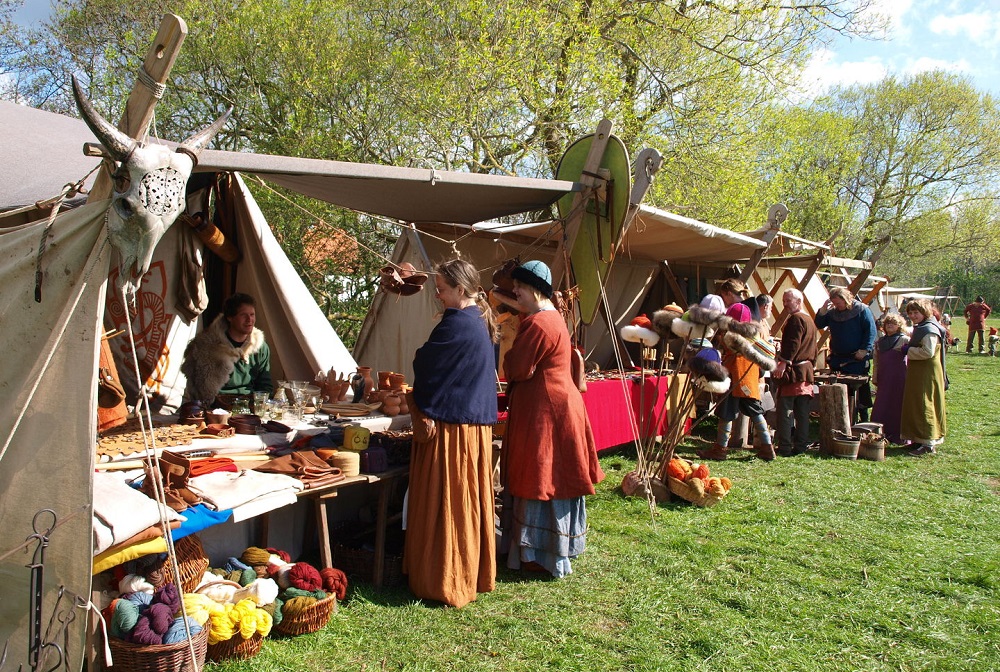 Near Jutland’s west coast, there are more places to visit with a Viking theme. At Ribe, the Viking Centre recreates a medieval village complete with farm buildings and costumed ‘inhabitants’ like blacksmiths, furriers and falconers, all busy with their everyday activities.
Children can sign up for warrior training sessions, donning real helmets and sparring with shields and swords. They can also try their hand at archery and learn how to whittle willow into a spear.
Ribe itself is a charming town, Denmark’s oldest, dating back to around 1300, with picturesque narrow cobbled streets, colourful half-timbered buildings, an impressively large church and cafes galore.

Porpoises, activities in the Gorilla Park, and a great restaurant

Jutland’s indented east coast offers the thrill of whale watching. Trips go out from the harbour at Middlefart, an ancient trading post, now with craft shops as well as a splendid red brick church. It is situated beside a long sheltered inlet called Lillebaelt – Little Belt – which is home to one of the world’s highest concentrations of porpoises, the smallest whales. 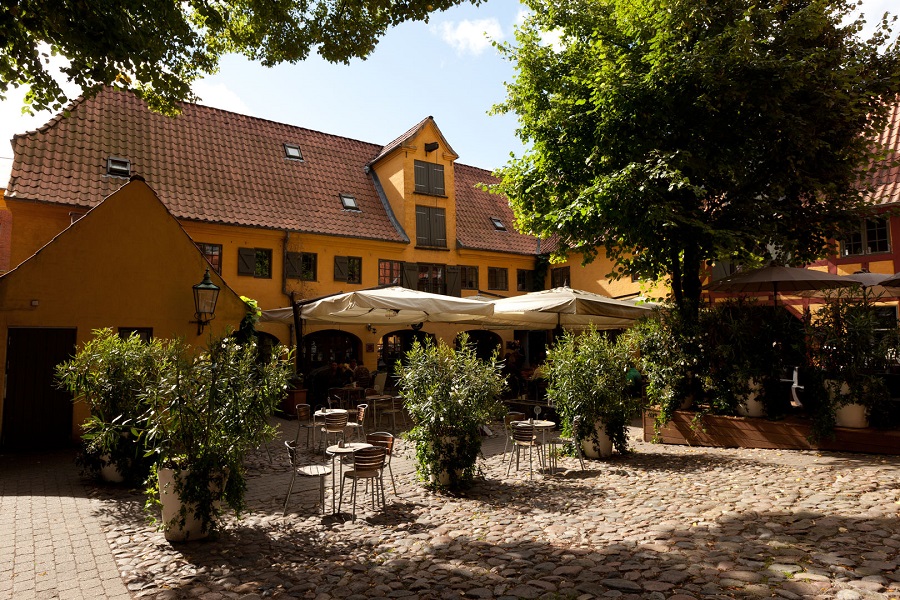 Nearby in Vejle, the main town, my grandsons as well as their mother were thrilled if not a little daunted to discover the Gorilla Park. Set in a beech forest, it boasts a series of challenging zip-wires and trails along wobbling platforms, all waiting to be negotiated with the help of ropes and pulleys.
While they were challenging themselves on them, I headed for the lively town centre where I discovered a pedestrianised high street for shopping and a smart new marina.
A highlight of the trip for me was dining by the water in the stylish but casual surroundings of the Remouladen fish restaurant where its young chef, Daniel McBurnie who trained under Rick Stein, succeeds in conjuring up some very special flavours. restaurantremouladen.dk

Decorating with Plants – What to choose, ways to style and how to make them thrive.

Lyon – On The Menu